The Heritage 3000 (H3K) was first introduced in 1999. Its famous purple colour and features made it so distinctly Midas. It soon established itself as the world wide industry standard for live sound applications. The H3K proved to be a huge winner from day one.

The striking colour scheme wasn’t the only thing that made waves within the industry. With a new pre-amp design bettering that of the iconic XL4, large channel and aux counts plus the flexible aux switching system, it’s no wonder the H3K appeared on everyone’s spec as the console of choice.

Living up to the reputation of the H3K is undeniably a hard task; the H3K set a new standard in live mixing.

Naming the Heritage D after such an iconic mixing console was indeed a bold move. However, this product is bold and visionary whilst keeping the legendary sound quality and raising the bar on what a digital mixing console can achieve.

Building on the prolific history of the H3K and PRO Series consoles, the new Heritage D now reinvents the workflow of the sound engineer. Finally, a Midas you can touch. Featuring a powerful 21” HD touch screen and formidable ultramodern Graphic User Interface (GUI) control all at your fingertips. Heritage D is a vision of the future with thought provoking new features such as Channel AI (yes, Artificial Intelligence).

This platform is designed for the future and will continue to grow and develop over many years with an impressive Midas team that are eager to improve and constantly add new features. Your investment in the Heritage D is safe.

At the heart of every mixing console is the most important part – Audio. Overlooked by other manufacturers, we have always put sound at the top of our priority list.

It was hard, almost impossible, but we improved on the legendary Midas digital sound with our new 64-bit summing mix engine with increased dynamic range. Driving a Midas has never been easier.

The key to the Midas sound is in giving ultimate flexibility while still being delay compensated. Avoiding the dreaded comb filtering effect is so very important. Many other consoles simply ignore this crucial part of the audio signal path.

The Flexi-Aux system gives the ability to send aux to aux for group or stem style mixing. Now you can smash a whole drum kit with parallel compression and feed it to an artists in ear mix. 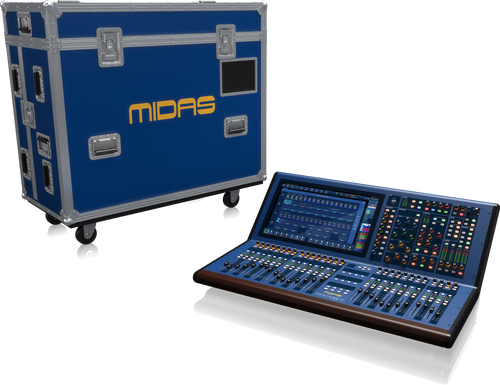